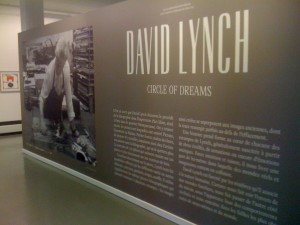 A red curtain opening into infinity, into an dreamlike and phantasmagoric universe, disturbing and puzzling. Warped mirror of the human soul, which unexplored shadows locks the darkest visions. A red curtain from which one expects to stumble endlessly upon the woman with the log or the backwards speaking dwarf. Mythical characters of the the dazzling series Twin Peaks. The tortured mind of David Lynch had us walking deep inside the realm of his imagination. But the director hasn’t finished yet to surprise us and to shackle us to his explorations in the subconscious lynchian maze.

This time, the repeated offence find its way through another kind of opera. Cinematography is still in there of course, although the expression is different. Director, painter, photographer, and singer David Lynch has discovered himself a passion for lithography. He accepted in 2007 the invitation of Patrice Forest, his editor, to throw his body into the soul of this experience from which his universe takes new dimension.

The first series of printings represents abstract drawings made upon post-it notes. An experience which inevitably refers to his former operas, but also creates a link with his most intimate thoughts. As the hero of Eraserhead, the lithograph wants us to believe that one’s dreary ordinary life finds only its way through phantasmagoria.

Industrial cities in fire, crawling insects (reminding of Blue Velvet overture), repressed screams, internal electricity. Game of shadows and lights, nude women’s bodies et torn (hommage à Marcel Ducham), crashes. The printing work speak for itself. Almost impossible to describe for it has to be seen to be felt. The author unveils personal pictures, dreams, visions, printed on stone in the famous Idem workshop, in Paris, where the masters Matisse, Giacometti and Picasso worked before him. The result can be seen in the exposition Circle of Dreams, that the Centre de la Gravure et de l’Image Imprimée propose until may 19th in La Louvière, Belgium.

Installed on two floors of the museum, it shows in a matter of 120 engravings the artist’s genious. It is accompanied by Lynch experimental short-films from the late sixties. A documentary where one can discover the meticulous work done into the printing shop in Paris. And a clip used by Moby for the song « Shot in the back of the Head ». In addition, the Centre culturel régional du Centre organizes a retrospective of Lynch’s early works : Blue Velvet, Mulholland Drive, Sailor and Lula, Inland Empire, from march 7th at the Ciné Stuart.